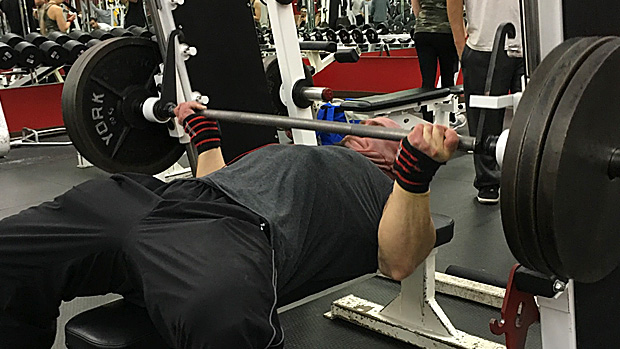 One of the great, stupid, steroid-influenced exercises of all-time is the reverse grip bench press. The exercise had been popular for years among powerlifting types, but was co-opted by body builders and thus became part of the classic, steroid-influenced “Chest Day,” workouts. I hadn’t seen this exercise performed much over the past 15 or so shears, until just the past few weeks. My guess is that one of the men’s fitness magazines recently decided to regurgitate this classic time waster.

Back in the 1990s a bench press specialist named Anthony Clark made a name for himself by becoming the first man to reverse bench press 700-pounds, and eventually hit the 735-pound mark. I saw him bench 800-pounds at the Arnold Classic in Columbus, Ohio in 1997. By the way, these benching feats were performed wearing bench shirts that add at least 100-pounds to the lifters non-shirt max. Steroids and other drugs can add at least 100-pounds. At the Arnold show the lifters were using a new kind of shirt that was made of some kind of denim blend and were so tight that several of the lifters could not get the bar – loaded with 700-pounds – to their chest! But I digress…

But back to the stupidity of the reverse grip bench; it’s stupid, it doesn’t make you stronger and doesn’t develop your chest any better. If you use steroids, everything makes you stronger and just about every exercise develops everything.

So for you guys loading 85-pounds (!) on the bar for your “reverse benches,” stop wasting your time and stop putting undue stress on your shoulders and elbows. If you must bench press, do the regular bench press. The reverse bench press has no point, doesn’t improve anything, and should be thrown on the scrapheap of exercises.