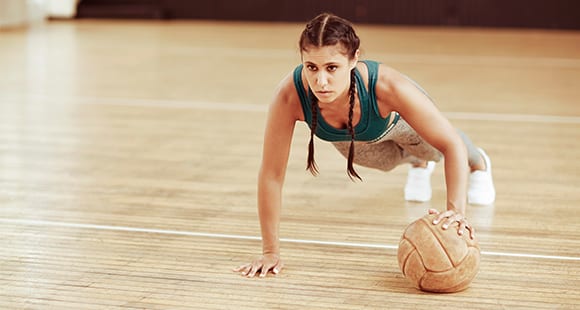 Squat thrusts are a fantastic exercise and should be included in everybody’s fitness workout routines.  At home, in the gym, or with a personal trainer, you can use them to warm-up or as part of a calisthenics routine to improve your cardiovascular fitness, and they can be adapted to be used by people of all fitness levels from beginners to advanced.

Squat thrusts are a versatile exercise that can be adjusted in a variety of ways to make them appropriate for people at all levels of fitness.  As you can see in the squat video tip, the basic squat thrust technique is a total body movement, and as a result is an efficient and effective exercise.

In addition to the progression featured in the squat video clip, folks of all levels can add to the difficulty level of their fitness workout routines at home by holding dumbbells, thus adding resistance to this calisthenics move.   For the uninitiated, perform the squat thrusts on a box or step that is at, or just below, knee level and as you progress and feel more comfortable you can lower the level of the box until you’re comfortable enough to perform squat thrusts with hands on the ground.

Start with the one-leg-at-a-time, or “slow-motion” variation, until you are comfortable with the technique that allows you to hold your body steady while in the bottom position of the squat thrust, which resembles a push-up position.  You can even combine the slow-motion technique with the regular technique by getting into the bottom position by moving one leg at a time, and then jump your feet back to the squat position.

Advanced folks can perform squat thrusts with dumbbells, which provides an added degree of difficulty to the movement.  There’s nothing too complicated with regard to this variation, as all you do is hold the dumbbells at arm’s length and perform the move as demonstrated in the squat video clip.  In order to minimize the stress placed on the lower back, make sure to keep the dumbbells as close to your body as possible when standing up to the beginning position.

Squat thrusts are a simple, but effective and challenging addition to your fitness workout routine that can address the needs of people at all fitness levels.  The sooner you start doing them, at home, in the gym, or with a personal trainer, the sooner that you’ll start to improve your fitness level.

"Playing Up;" The Scourge of Youth Sports

Athletes Need to Stop Jogging on the Boardwalk

An Exercise For the Scrapheap: Reverse Grip Bench Press

Why You Should Get Outside and Exercise