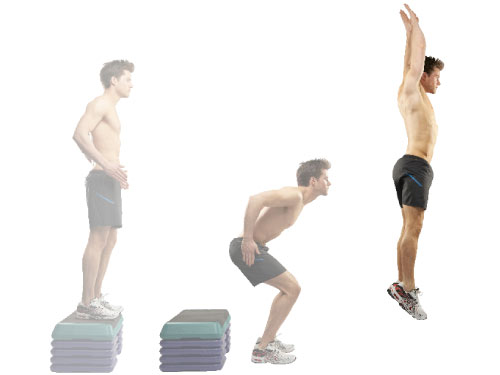 Anybody who has spent any time in a gym has most likely seen people performing exercises while in a horizonal position. You know, lying down. There are a variety of exercises that can be referred to as “planks” that are very popular that have been touted as developing core strength. Ah, core strength, one of the great fitness buzz terms of the past half century…

But these exercises, which can develop horizontal stability, have little purpose and contribute even less to function. We need vertical stability because we operate vertically, standing upright on two feet, not horizontally on all fours or lying down. Gravity exerts a precise force on our bodies while we are standing – differently than when we are horizontal – so we should perform the vast majority of our exercises while standing.

Your hip works in a different manner when you are on all fours than it does when you are standing, so this “all-fours” exercise will only make you “better” when you are in this all-fours position. Unless you walk around on your hands and knees you are wasting your time, and you also have some other problems.

Planks have their place in an exercise program as long as the place is somewhere in the first three to six months (and I am being generous) of a newbie’s workout program. When a formerly inactive person makes the transition to active, their overall strength (including core strength), balance, coordination, agility, etc is quite bad.

This is where the plank family of exercises comes in. Despite what you may think, these exercises are quite easy, which is why they are suitable for beginners. These basic planks can help prepare the body for the (hopefully) rapid transition to standing, two-footed exercises. So do your basic forearms and toes plank, get good at it, and move on up to standing on your feet. And don’t look back.

Now I know what some of you are thinking; “But Sal, some of those planks are really hard and some of them I cannot even do!” To which I reply in a number of ways.

1. Just because an exercise is hard to do doesn’t make it a good exercise to do.

2. The horizontal exercise is hard to do because we have evolved away from performing in this posture and we are not built to work this way.

3. You can train a muscle to do anything, but doesn’t make it the right thing.

Four-legged animals are efficient at performing certain tasks, but put them in a two-legged stance and not so much. For humans a four-legged, horizontal posture is beneath our capability level. It is kind of like putting a snow plow on a Porsche; not a good use of the machine.

We have evolved to be able to perform high functioning tasks precisely because we do not use – do not need – our upper limbs for balance and locomotion. Walking upright has allowed the human brain to pursue more complex functions like manipulating objects (throwing and catching) and a wide-range of intellectual pursuits like art, philosophy and developing reality TV shows.

The benefits of working while horizontal are limited to operating in the horizontal position and quite frankly this work is counter-productive. Vertical stability, not horizontal, should be worked on in every exercise session.